New smartphones have hit the market during the festive season.  When we go to pick up the phone we ask how many mAh its battery is.  The battery of the phone is very important.  So today we will tell you what to look for when charging a bat.  Smartphones have become one of the most important devices in our lives and since most of the work of many people is based on it, it also plays an important role in connecting with people.  It requires that the phone be charged throughout the day so that you can use your phone all day.  Let us know some misconceptions and the true reason behind it. 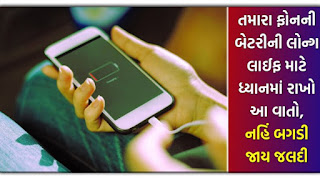 Follow these tips to increase the battery life of your smartphone:

Do not leave charging overnigh

All batteries have an expiry date and the same applies to smartphone batteries.  How you use your smartphone has a direct impact on battery life.  Many people have a habit of leaving the phone charged.  But doing so overcharges the battery and also affects the performance of the phone.

Only use the original charger

Each company makes a special charger for the phone.  Sometimes people use any charger instead of charging in the original charger of the phone.  Doing so damages both the battery and the phone.

Remove the cover and charge the phon

People also wear sturdy covers to protect the phone.  So charging the phone with the cover can also cause the battery to overheat and the battery can rupture if the charging is not stopped.  So remove the cover and charge the phone.

Do not use the phone while charging the power bank

Sometimes people charge the phone from the power bank and use the phone in the meantime.  But doing so damages the phone's performance battery display altogether.  So as not to make such a mistake

Abandon the lure of cheap chargers

Never take a cheap charger found on the road.  Such chargers do not have a system to prevent overcharging and excessive power

More use of fast charger is harmful

Not always using a fast charger is appropriate for the battery.  Fast charging allows more current to pass through the phone's battery.  If your smartphone's battery settings have a normal charging option, always choose one.

Do not use a third party battery app

Do not use a third party battery app.  As it will constantly run in the background and have a bad effect on your battery.  Which will use more instead of saving the phone battery.

Fast Economy:the easiest way to conserve battery life. PowerPRO’s main purpose is to work as a power saver on your phone. Use it several times a day to help save battery power, especially if you use your phone frequently and can’t recharge it.

Super Economy: stop apps you aren’t using from consuming battery life. The Super Optimization functions as an on/off switch so you can easily choose which apps you want to keep running and which ones you can turn off to extend your battery.

Screen Saver: worrying about your screen’s brightness eating up valuable battery life is a thing of the past. Our new battery saver technology shuts off up to 33% of your screen's light output without compromising brightness and visibility.

Economy Profiles: activate the Economy Profile that is right for you to extend battery life. There are four personalized battery saver profiles: customize and choose the best battery saver according to each moment of your day and that's it! PowerPRO does everything automatically.

Battery Cooler: One of the best battery savers is helping to make your phone cooler by lowering the temperature of your battery. Not only will you save battery life, but you will protect your CPU and other components from damage.